CogFest is an annual multi-day event brought to you by the Center for Cognitive and Brain Sciences.

The annual CogFest event series gathers inquisitive minds from across the Ohio State University and beyond to discuss ongoing research in the cognitive science field. Bringing together the real-life application of cognitive science, expert speakers, and current research, CogFest aims to excite experts and non-experts alike. Anyone interested in the cognitive sciences and affiliated sciences is welcome to attend this series of events each spring. 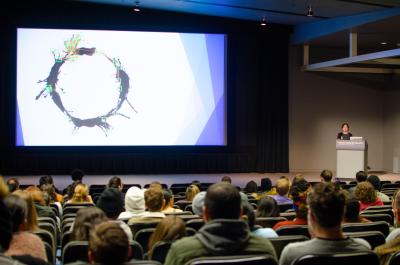 Each year, CogFest features an event aimed at engaging the community outside of OSU. Guests are treated to a discussion by leading experts in relevant fields to analyze the cognitive science themes underlying their favorite media, films, and art. CogFest uses the real-life application of cognitive science to connect CCBS with a wide-ranging audience and inspire anyone to take an interest in the field.

CogFest events in the past have included film screenings and associated talks/panel discussions. CCBS has featured films such as Arrival (2016, Villeneuve), which was followed by a talk by Prof. Jessica Coon (McGill Univ), who consulted on the film. Another year featured a panel discussion on the Netflix series, The Good Place, including scholars who consulted on the show and/or have published scholarly work on the series. 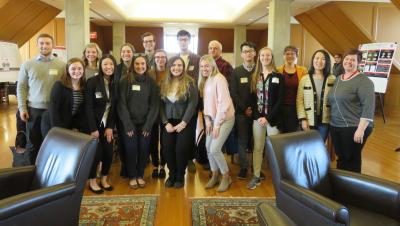 The CogFest Undergraduate Poster Session provides interaction between faculty and students from across the university who are exploring questions related to human cognition, including learning, memory, perception, language, and decision-making, from behavioral, applied, computational modeling, and cognitive neuroscience perspectives.

Ohio State undergraduates involved in research in the cognitive sciences are invited to participate in this annual event. The poster session is an opportunity to share ongoing research with the Cognitive Science community at Ohio State and gather expert feedback on projects.

We are now accepting presenter applications for the 2023 Poster Session on March 24. Learn more and apply here.

Congratulations to our 2022 winning presenters:

To view information on past CogFests, visit our Program Archives.