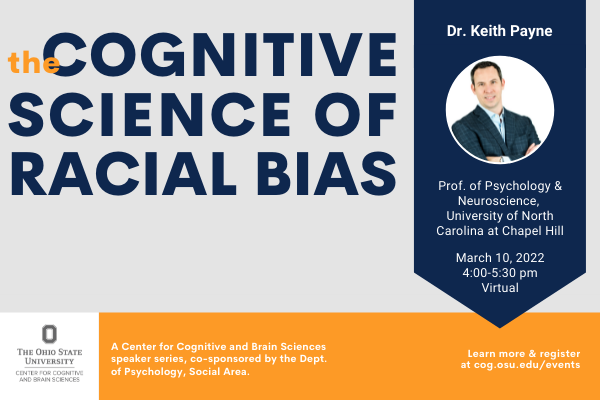 Title: The Bias of Crowds

Attend this talk in-person or virtually, no registration is needed:

Abstract: Millions of people have taken an implicit test of racial bias, and most display a preference for one group over another. The meaning of that preference is a matter of lively debate. When a person displays an implicit bias, does it mean that they are a biased person? Or does it mean that they inhabit a biased social environment? It could be some combination of both. In this talk I discuss a theory that describes implicit bias not only as a feature of individual minds, but as a feature of social contexts. Akin to the “wisdom of crowds” effect, implicit bias may emerge as the aggregate effect of individual fluctuations in concept accessibility that are ephemeral and context-dependent. The aggregates, in contrast, are stable, reliable, and highly correlated with a range of important disparities. I will discuss new research on the role of statistical aggregation across persons and contexts, and the role of history and systemic racism in shaping implicit bias. Viewing implicit bias as a feature of social environments resolves several puzzles in the existing literature, turns supposed methodological weaknesses into strengths, and generates new insights into how and why implicit bias propagates inequalities.

This event will feature a 60 minute presentation followed by an audience Q&A session with Dr. Payne.

The Cognitive Science of Racial Bias series is designed for an audience with knowledge of experimental cognitive science methods and an interest in implicit bias. Email CCBS@osu.edu with any questions.

This series is co-sponsored by the Psychology Department, Social Area.