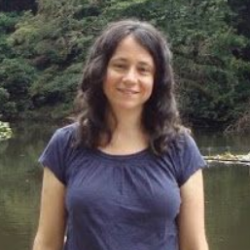 Please join us for a talk presented by Dr. Lisa Davidson, Professor and Chair of Linguistics at New York University.  Dr. Davidson will be presenting:

The intersection of prosodic context, pitch, and gender in the identification of creaky voice

Abstract: Creaky phonation in American English has been observed both in a prosodic role as a phrase-final marker (Kreiman, 1982; Slifka, 2006), and as a sociolinguistically conditioned element (Henton & Bladon, 1987; Mendoza-Denton, 2011). While creaky phonation has been discussed both in the linguistic literature and in the popular press, it is unclear how accurately naïve listeners can detect creaky voice, and what factors facilitate or hinder its identification. Three possibilities are considered: (1) listeners’ identification of creak in American English may be modulated by acoustic properties of speakers’ voices not related to their gender, (2) listeners may be biased to attribute creaky phonation to women even when it is also present in male speakers, or (3) they may identify creak equally among all speakers. In this study, American listeners are presented with two experiments containing stimuli from both high- and low-pitched male and female speakers. Other manipulations include whether or not the utterance is a full sentence, and whether the utterance is completely modal, completely creaky, or partially creaky (final 40-50% of the utterance). A robust finding is that listeners are least accurate on partial creak, suggesting that creaky phonation is least salient when it serves as an utterance-final marker. There are no strong effects of gender aside from a weak tendency to identify creak more often for females than males in the whole creak condition in one experiment. In contrast, when no creak is present, listeners false alarm on the low-pitched males. Overall results indicate that rates of identifying creak in male and female speakers are relatively similar, but prosodic properties and acoustic characteristics such as F0 interact with how well listeners can recognize creaky vs. modal speech.